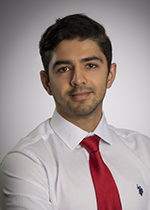 Addy Kapoor began working with the Wealth Planning Group team in August of 2019. He is currently in his final year of a Bachelor of commerce (Honours) degree with a major in Finance at the University of Manitoba Asper School of Business. His responsibilities at Wealth Planning Group include making statements, handling and processing trades and paperwork, assisting the advisors and ensuring client satisfaction.