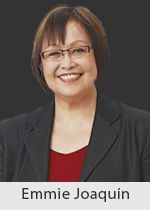 As a very active member of the multicultural community in Winnipeg, Emmie’s knowledge and understanding of the immigrant experience allows her to focus on helping families and businesses define their financial goals. Emmie speaks English and Filipino (Tagalog).

Born, raised and educated in the Philippines, Emmie earned her Bachelor of Arts degree in Broadcast Communication from the University of the Philippines ((U.P. Diliman). She was the Public Relations Manager of the multinational advertising agency, McCann Erickson ((Philippines) until she immigrated to Canada in 1988.

Emmie has received both the Queen Elizabeth II Golden Jubilee Medal in 2002 and the Queen Elizabeth II Diamond Jubilee Medal in 2012 for media and community service. She was also a nominee for the YM-YWCA Women of Distinction Award in 2004. In 2018, she received the Pinays Trailblazer Award for outstanding media and community service from Pinays Manitoba, a women’s organization that recognizes Filipino women achievers and aims to empower women in Manitoba.